This past fall, I traveled to Dade City, Florida for the wedding of one of my dearest friends, John Sessa.  I met John back in 2003, when I was on the trip of a lifetime, to cycle part of the Tour de France.   In an act of serendipity, John was the bike mechanic for the tour group company, and he quickly became friends with myself, and my friend, John, who accompanied me on the trip.  I left France with the cell phone number of John Sessa, knowing that somehow, our paths would cross again.  Those paths intersected once again just four months later when he came out to Flagstaff for Thanksgiving, and eventually moved in with my then friend, Grant, who four years later, became my husband.  Do you feel like you need a flowchart, cause sometimes I feel like I do.  🙂   Over time, we lovingly nicknamed him “The Bike Whisperer”.  He was like the McGyver of bikes, he could fix anything.   But, although we loved having him here, John got restless.  His favorite thing to say was “Home is where the heart is, and my heart is on the road“.   John soon accepted a job as the lead mechanic with a pro cycling team and he was off to Europe, Asia and many places in between for bike races.  One of my favorite things was for him to roll into town with the various bike team buses (Fakta, Rock Racing, Jelly Belly, and most recently, Team Type II).  I loved the look on my neighbors’s faces as they spied the 20+ foot cycling trailer parked in front of my home.

I remember when John came back to Flagstaff for my wedding in 2007, I asked him what was new.  He said, “Well…I’m kinda seeing someone” (which is, just so you know, dude talk for “I’m in a serious relationship”).  I asked him a few questions about this gal, and she sounded like the coolest chick I could ever imagine, smart, a talented journalist, beautiful and caring.  John even described her, in his own endearing way of making up his own words, as “awesome-a-fied“. It wasn’t long before I got to meet Molly myself when she visited Flagstaff, and I agreed with John, she WAS super awesome-a-fied!

Fast forward to September 2011 and John was here for our friends, John and his wife’s, wedding.   He stopped by the studio to say hello, and then, I remember he said to Kristen and I…, “So….you chickas wanna go look at some engagement rings with me?”  Yes!  First of all, it takes NO arm twisting to get Kristen and I to look at sparkly, beautiful rings, and secondly, I was so happy for John that I wanted to explode.  After a couple of hours of looking at several different options, John ended up picking up a beautiful set from our local jeweler, Will McNabb, and I can honestly say, it’s the perfect ring for Molly.

Molly and John were married at the gorgeous Dade City Garden Club and had their reception at the Dade City Women’s Club.   Everything about this wedding was so thoughtful, from the mini cupcakes favors baked by her friend Amy, the delectable dinner made by their friends at Pearl in the Grove restaurant to their friend, Jan as their officiant.   The tangerine colors beautifully accented the natural green surroundings and complimented the citrus decorations to perfections.  As Molly walked down the aisle, I held my breath.  I love the look on the couples face at that moment…it’s like if time stands still.  And when they said their vows, I cried.  But, happiness does that to me.  🙂

I hope you enjoy a few of my favorite photos from the day! 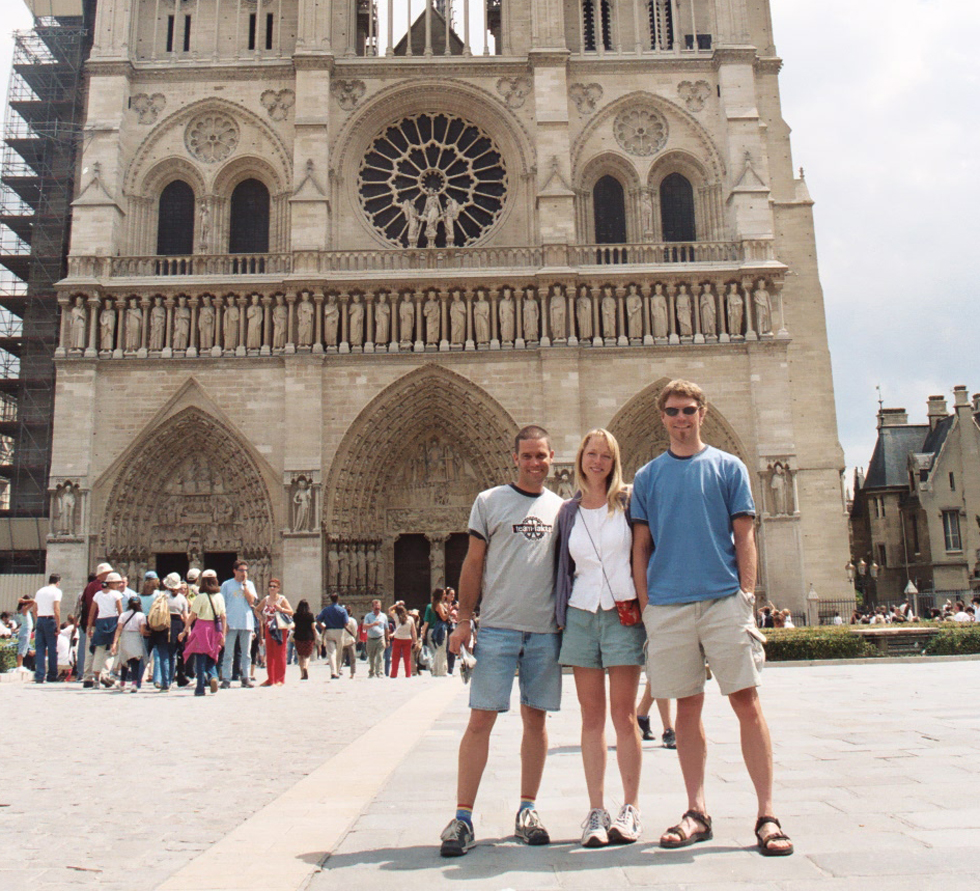 I just found this photo of John, John and I in Paris.  I just had to share this photo of the three amigos.  What a great time we had!  It’s funny just how quickly nine years can pass.  I’m am so fortunate to have such a great group of friends.  Friends that has really become my family.

I am a lucky woman.

Congratulations to Molly and John!  Thank you so much for having me as your photographer, but mostly, thank you for your friendship.
xoxo,
Melissa