Fourteen years ago I fell in love with a silver tabby kitten.

It was a hot summer day in July of 1998 and I was living in Bullhead City, AZ.  I went out to take the trash can to the curb and I heard a soft “meow” noise from the front yard.   I stopped in my tracks when I realized, to my surprise, someone had discarded seven very young kittens.  As I was cursing this horrible person, I picked them up and brought them into our house. Kittens!  Who could do such a thing?   They were all so skinny, and so dehydrated from being out in the 120F+ heat.  They all lapped up the cool water very quickly and were devouring the cat food I had offered them.   In the next 48 hours I looked after them carefully, and tried to formulate a plan to find them homes.  At the time, Bullhead City didn’t have an animal rescue organization and from the volunteer work I had done, I knew that taking them to the Humane Association would likely be a death sentence for these sweet souls.  So, I decided to find them all homes myself. 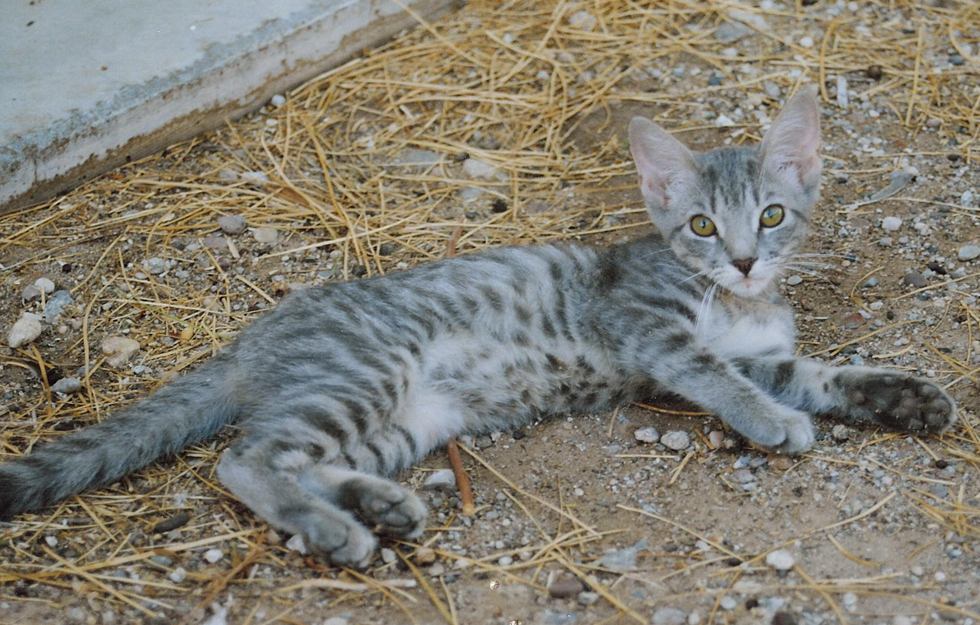 I worked in the medical community at the time, and I made a few homemade posters of the kittens, with individual photos of them, and placed them around the hospital.  Day after day, people came to our house and looked at our beautiful kittens.  One by one they were adopted, except for the one we had come to call “JoJo”  (Short for Joseph Johansen).  Now this really perplexed us.  JoJo was the only one that we had named, and it was because he was quite a character.  At only 8-10 weeks old, he would chase our FOUR large dogs around the house and tease and play with them relentlessly.  He would jump on our heads in the middle of the night, and his antics had our entire household laughing uncontrollably.  He was definitely special.   He never found a home because of one thing…every time someone would come to the house to see our kittens, JoJo was no where to be found.

So, when the last person came to the house, and I couldn’t find JoJo, I simply told them there were no more kittens for adoption.  And it’s funny, as soon as I said that out loud, JoJo miraculously appeared.  And then, it became clear to me…

I had been adopted by JoJo.

At the time, I had two other cats, KelseyKai and Luke.  JoJo tried to charm them, but they were not quite sure about this kitten with so much energy and so much personality.  There were a few cat arguments  but JoJo finally won them over.  And, that winter, I quickly found out JoJo’s favorite time of year, Christmas.   Once a year, in JoJo’s eyes, the most astonishing thing would happen…a magical tree would appear with cat toys draped on it!  It was, of course, our Christmas Tree.  The first year, JoJo must have taken off every ornament on our tree to play with it.  After that first year, however, he resigned to only removing the lower ones, while he sat under the tree and gazed at the lights.  Christmas always makes me think of JoJo.  I hope it always does. 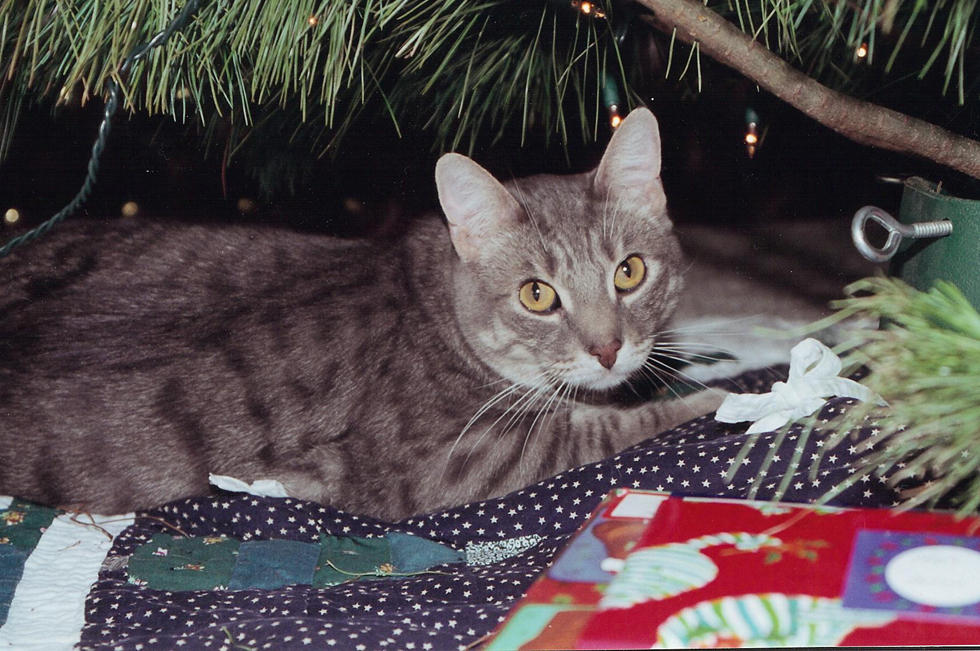 The years brought changes, and in 2001, I found myself in Flagstaff, AZ with my four animal friends.  In 2003, we bought a 1970s gem, just north of the hospital.  To call it a “fixer-upper” is an understatement but we thought it was perfect.   It was home.  JoJo’s favorite thing about the house was the deck.  On sunny days, he would lay in the sunshine outside, and when snow covered the ground, he would find the sunny spot inside and bask there.    His favorite toy was a feather attached to a fishing pole.  He would amaze us with jumps as high as five feet!  In 2006, JoJo gained a dad who adored him, my now husband, Grant.  Later on in that same year, although healthy otherwise, JoJo lost his sight.  We were frantic at first, but quickly came to realize that he got along just fine without his vision.  He became a bit more cautious when he jumped on the furniture and I noticed he walked a little more deliberately, but his ‘handicap’ didn’t phase him at all.  He still jumped for that feather as high as he could!

One day, he brought me a special present, a headless mouse.  I know JoJo was very proud as he rubbed against my legs when he presented it to me.  I never knew how a blind cat could hunt for a mouse.  But, as my friend Kelley said that evening, “Maybe it was one of the Three Blind Mice?” Those words still make Grant and I laugh out loud.  Sweet JoJo, thank you for thinking of me.

JoJo also had a few other super powers.  Despite his blindness, he could sense a lap while it was in motion of being formed.  Our friends would always marvel at how our blind cat would appear from nowhere as soon as they sat down on our couch.   He also could tell when I was about to open the refrigerator to get some yogurt.  But, yet, he would not appear when I was getting something else out.  I honestly don’t know how he did it.  He LOVED yogurt, maybe even more than he loved laps.  Well, maybe not that much.  He also had a skill of finding the sunny spots and would follow them through the house all day.

JoJo was a lover.  He had some special animal friends in his life, but I think his BFF was definitely BobKitty.  BobKitty was a stray who came to live with us about 3 years ago.  I think JoJo felt his stress and loneliness and he quickly befriended him.  From the time BobKitty came to live with us, to the day that JoJo passed away, those two were together.   On the morning after JoJo’s passing, BobKitty just sat on the chair that JoJo and he used to share for their morning nap.  It broke my heart as I saw him look around for his friend.

JoJo’s final days were very hard for all of us.  Despite all the veterinary care we could offer, JoJo’s body was just worn out and this past Saturday, he joined KelseyKai and Luke in heaven.  Like BobKitty, I find myself looking for JoJo when I get up in the morning and am saddened when I remember that he’s gone.   I miss his purrs and I miss him putting his paw on my heart.  He would do that when we would cuddle together.  During his last few moments on earth, his paw was right there on my heart.  I think it was his way of telling me that he’d always be with me.

JoJo, thank you for choosing me as your mom 14 years ago.

Some people say I rescued you, but we both know it was the other way around.  You gave me love, laughter and kindness when I needed it most.

Enjoy heaven my sweet boy, and, I hope,  the bottomless bowls of yogurt, warm laps to  cuddle in and sunny spots abound.

We love you now and always,