A big thank you to  Beantown Bride for their feature on Leigh & Preston’s Rockport, MA wedding at Emerson by the Sea!   This Boston wedding was absolutely spectacular and was an honor to photograph.  Take a look at more of their gorgeous wedding below! ~Melissa and Kristen 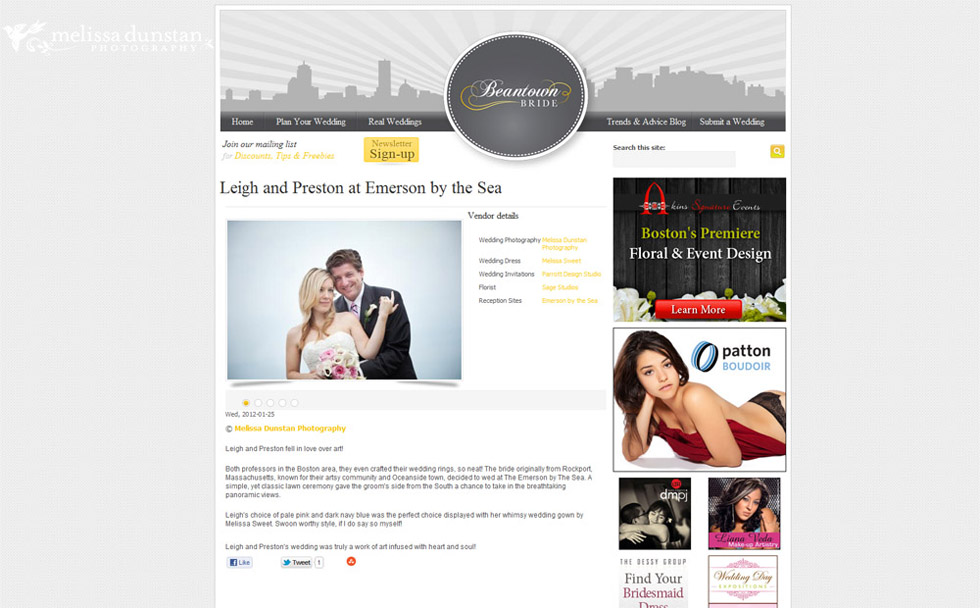 This August, I headed to spectacular Rockport, MA to photograph my best friend’s wedding. I’ve known Preston since 1989, when I was at the University of Georgia and he was a ceramic student at Shorter College.  He was my then boyfriend’s big brother in a fraternity that they created named “Alpha Lamba Epsilon” (which the abbreviation, by the way, obviously spells out “ale”.  This was a joke among the brothers as traditional fraternities were not allowed at their small, very conservative college.  They thought they were being really funny by spelling out a code word for “beer”)  But, those college stories are for another day and time…

As soon as I met Preston, he was immediately my best friend.  Preston was always there for me, always.  He took me to the airport on my first ever time on an airplane (yes, I was 25, I know…I’m a late travel bloomer:), and met me when I got off the plane and took me for a cocktail to celebrate.  He and I have watched every John Hughes made, probably 100 times each.  I can’t tell you how many times we’ve quoted this scene from Weird Science.   He introduced me to art and tried to teach me how to appreciate it.  (Although I think when we were at the Metropolitan Museum of Art I might have started to go to sleep when he was lecturing me on composition)  He was always there when I needed someone to listen to me, someone to encourage me and someone to act silly with.  We’ve been to at least six Jimmy Buffet concerts together, visited each other in all the different states we’ve lived in and always, always been each others cheerleader.  From day one, even when I was just starting out, he encouraged me to follow my heart and become a photographer.  He and I recently laughed at just how bad I was when I first started, but he said to me that he saw just how much I loved it and above all, he wanted me to be happy.  And, I suppose, that’s what best friends do, they support one another regardless of the odds.
One thing a lot of people don’t know is that Preston made my engagement ring.  One of the reasons that I love my husband so much, is that he’s thoughtful and has always understood my close bond with Preston.  Recognizing this, he called up a man he’s only heard stories of, and asked him to design and make my engagement ring.  I cannot tell you how much this gesture meant to me, it somehow just can’t be put in words.  He came to my wedding as my Brides-Man and stood as witness when I said my vows to Grant on a cold, snowy day.  When I asked him to be in my wedding, and if he would feel strange as a bridesmaid, I mean bridesman, he replied, “I’d do anything for you, even wear a dress if you want.”  I knew that even though we were joking, I knew deep down he was serious.  He would do anything for me.

Preston is a professor at Bridgewater State University now but also finds time to make some beautiful ceramic art pieces.  Along the way, he also became a wonderful metal worker.  He, of course, made Leigh’s rings with a solitaire diamond surrounded by pink sapphires.  Leigh, also being an artist, designed Preston’s ring.  I can’t even begin to imagine how artistically gifted their kids will be!

So now that you know a little bit about my friend, fast forward to February 2011 when I got a call that I ultimately knew would come one day.  In typical Preston form, he quoted a John Hughes movie, Sixteen Candles, and just said this when I picked up the phone….”Married??!!??“.  I immediately knew what had happened.  Holy Cow, my best friend was getting married.  And, so I responded just like Jake in Sixteen Candles, “Married??”  And Preston said, again, “Married!!!!…Gez…!!”  It’s a dialogue only best friends can understand.  At this point, I had never met Leigh.  I had only heard stories about her and watched how my best friend’s eyes would light up when he told me about her.  But, it was when they first met when I knew she was going to be The One.  Preston called me up and announced he had stopped smoking cigarettes.  What!?! I was so happy for him, as I had been hounding him for YEARS to stop.  I asked “What changed your mind?”  And this response is really what amazed me…”Leigh doesn’t like kissing someone who smokes“.   Right then I knew I would like her.

To say I was nervous when I met Leigh would be an understatement.  I. Was. Terrified.  What if she didn’t like me?  What if I messed up the wedding photos?  What if I threw up on her shoes?  (OK, that probably wasn’t going to happen, but I worry about lots of things…)  But, from the moment that I met her I knew why Preston loved her so much.  She greeted me with one of those big hugs that I appreciated.  It was filled with immediate respect and love.  And I loved her from that moment.
Leigh has wonderful style.  When I asked Preston what kind of dress she was going to get, all he told me was “She said it would be dramatic“.   Now, as a photographer, you never know what this could mean.  But, when I walked into her parent’s house, I was floored.  I think their kitty loved it as much as I did judging on how he was staring at it.  It’s a beautiful Melissa Sweet bustier and skirt.  And, it was made for Leigh.  She was stunning in this dress.  Leigh choose a pallet of pink and black for their day and everything was gorgeous.  The flowers, created by artists atThe Sage Florists,  were a combination of roses, calla lillies and hydrangeas and they were stunning!   I told you that Leigh and Preston were artists and they proved that when they took this design to their cake artist, The Cookie Countess.  Details at the reception were delightful.  I loved the combination of letterpress escort cards and table markers by Parrot Design Studio.  The star gazer lillies were as gorgeous as they smelled.  Emerson by the Sea , a lovely historic gem, was once owned by Ralph Waldo Emerson, and is flocked with beautiful quotes about love and life.  What a sweet touch for a wedding!

So, here’s a few photos from their day.  It was definitely hard to pick my favorites for the blog, but I hope you enjoy them.

To Preston and Leigh,

Thank you so much for allowing me to be your photographer on your wedding day.  I can’t even begin to let you know just how much it meant to me to watch you start your life together.  I hope you love the photos half as much as I adore you both.  Love and hugs to both of you! ~ Melissa